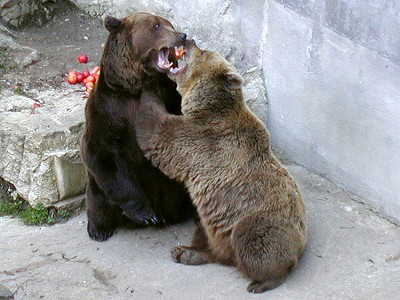 The bears live in the castle moat. They like playing in a natural bath with a beer barrel. The bears stay in the Cesky Krumlov because of a kinship that never existed. Strange, isn’t it?

The lords of Rosenberg allegedly were related to an Italian family called Orsini. Orsa means the she-bear. Ambitious aristocrat Wilhelm of Rosenberg decided to support the story not only by using the old documents confirming the relationship (actually fakes, but he did not know it). He had ordered to put living bears to the castle. Since, we carry on this tradition.

Mythos and Logos, fiction and facts, even fake news create the history and sometimes start the wars of interpretation or a real one! We have the bears in the moat. It’s a fact. But the reason why we have them there is based on medieval era fake news. Topical stories and contemporary affaires of our bears I would like to share with you during a private tour tailored just for you! You mean holding the bears in the castle moat is controversial? After the tour, we can discuss it by drinking a beer!