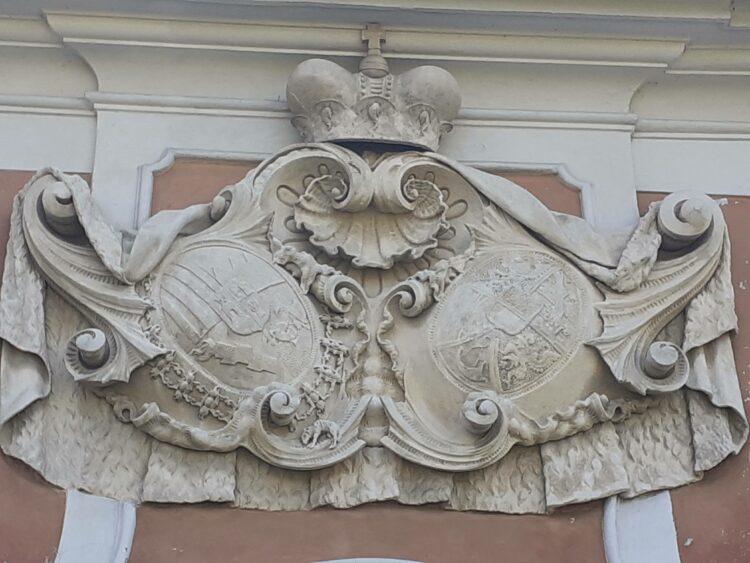 CONFISCATION? Not so much in this case! An aristocrat with ancient noble roots in Bavaria, Johann Adolf I of Schwarzenberg, starts to buy properties in Southern Bohemia after 30 years war (in the second half of the 17th century). However, the first manor, Třeboň, he receives from his friend, governor of Spanish Netherlands, who owes to him lots of money. Buying Orlík and Hluboká, the passionate collector of tapestries starts to be the founder of the Schwarzenberg domain in our region. Established in Bohemia, he receives the title Prince. The way how he had gained the properties in our country distincts him of the other “new”aristocratic families (Beginning of the religious war, confiscation of the protestants properties). But sure, all Schwarzenbergs stay catholic and loyal to Habsburg as well. In this way they are “new” too.

THE HEIRSHIP. 1719. Adam Franz of Schwarzenberg likes hunting and showiness. Now he inherits after his aunt lots of properties including what is nowadays Český Krumlov. Suddendly he happens to be like medieval era lords of Rosenberg. The land owner number one in our region and entire country. The domain becames for the second time the only dukedom in Bohemia!

TESTAMENT. This one looks like a book. Author? Ferdinand Wilhelm Eusebius of Schwarzenberg, the father of the “hunter” Adam Franz. Content? Codex of behavior of family members. Respected till nowadays by the most members of this famous Middle European family. One of his wishes comes to fulfilment in the year 1802- hundred years after his death: The family devides to two branches. The older one, our pivotal focus, calls Krumlov-Hluboká. The leader Josef II Johann proofes talent to economical leaderhip, very typical quality of this branch. The domain shortly before division of the both branches covers 500 000 ha ( Woods, land, ponds, farmsteads, etc.). From this point of view is this amount of property the absolut pinnacle in more than 900 hundred years long history of the House of Schwarzenberg. Younger branch has another fantastic leader- diplomat and finally famous winner over Napoleon at Leipzig- Charles I Filip of Schwarzenberg. His older brother admires him for this succes. Close to the castle garden of Český Krumlov, hidden in a wood, there had been built a monument there commemorating the famous battle at Leipzig. BREAKING NEWS. We know more about it including the way to this goal known as “The little castle of the birds”. Walking on the traces and stories about the family Schwarzenberg, I like to share this everything with you! And there is more there to be shown you around and told : architectural styles of their epoche, shadow stories about a “vampir princess” in the family or tragical fates of some members and famous social careers of others. Tours in the town and castle offer lots of amazing surprises!

1848. A fatal year for Europa, House of Schwarzenberg and Český Krumlov as well. In Prague, in Celetna street stands lady Eleonora, born Schwarzenberg, at an open window. Suddendly a shot of group of demonstrants kills her. Mistake? Who knows. Her husband believes the shot was intended to kill him instead of her. History knows him as general Windisgrätz.Not a popular guy in our country. The oldest brother of Eleonora, Johann Adolf II of Schwarzenberg represents the old branch of the family and desides (with his wife, called as well Eleonora!) to move from Krumlov. Both admire England as the most inspirative land in the world: culture, economy, industry, architecture. And they incorporate plenty of “english things” to Southern Bohemia. Hluboká castle had been changed to a modern chateau- a romantic Winsdor-like manor fulfils their requests on high society life better than originally still more medieval era castle Český Krumlov. Good for maintenance of its authenticity! I will show you! You can “meet” Johann Adolf II with his wife in the second tour of the castle too. Pivotal part of this tour shows their lifestyle.

CONSTITUTIONAL RICHELIEU. It is the nickname of the prime minister of Habsburg monarchie in the years 1848-1852. His real name? Felix of Schwarzenberg, another member of this strong generation. The only prime minister of a country ever, who had been born in Český Krumlov! At least yet-:). Reformes? Yes, but only in the frame of quite conservative constitution and no wild liberal experiments! This man happens to be the mentor of new elected emperor, Franz Joseph. And then, working a lot and beeing exhausted, he suddendly dies in age 52. What a lost for the emperor! But frankly, a chance too! “Nobody more will have so strong influence on me!”

COUNTRY ESTATES AND PROPERTIES. Corvée and serfdom were abolished. Society pursuits the personal happiness at least in a limited way of so called Bach´s absolutismus. Politicaly very conservative, quite severe. But economically not at all. Like nowadays China, you mean? Well, not in all aspects-:) If there is somebody who catches the modern trends in economy, agriculture and industry? Yes, the “prince among farmers and the first farmer among the princes”-Johann Adolf II. Modernising especially agriculture, he achieves in enterprising outstanding success. A good basis for inovative social programs in favor of his employees. Sobriety and allegiance. So is the tradition in his family, so is him itself too. His brothers and relatives occupy high ranked positions in the society. And sure, not everybody likes them. For example, a skilled Czech man, a liberal journalist, Karel Havlíček( means the small Havel) writtes: “Oh, how bad, how bad, mother Prague, Schwarzenbergs are here, one is general, another one cardinal”. Yes, well…

AGRARIAN REFORM. With the First World War ends “the long 19th century” and “good old times” for carriage-folk as well. Republican Czechoslovakia, a new democratic state, adresses the big landowners ( church, aristocracy) with land reform. Schwarzenberg loose more than half of their properties. They stay loyal to the new regime as always. During Hitler aggression they approve their loyalty to Czechoslowakia again. So the property of the primogeniture is confiscated by gestapo and last member of this branch emigrates and never comes back. After the Second Worl War things do not change better for them in our country. “Lex Scharzenberg” , a special law is imposed by Czechoslovakian parlament on the older branch of the family and all their properties are nacionalised. The male members of the older branch die out. Younger branch has to leave Czechoslovakia too. But there is a hope- a young boy of the Orlik branche! Charles of Schwarzenberg. He had spent part of his childhood in a chateau in the village called Čimelice-80km southwards of Prague. I have many stories about him for you during a city tour or after the walking tour, relishing a good medicine in a facility known as “Schwarzenberg farmacy”. Because off 30 years later after him, it is me who had spent the childhood in the same village, in a house quite close to the former Schwarzenberg chateau! So I agree to the statement, that “people in Southern Bohemia have House of Schwarzenberg under the skin if not in their mental code”. In my case, at least, both definitely yes!

NIL NISI RECTUM. Justice, law and nothing else. Slogan in latin on their crest takes my column here as guideline. It has inspired the sixth of “21 Stories of Magic Krumlov”. I have made this tour for local citiziens on the 28th of June 2020. So we have together reflected the rich architectural and cultural traces, Schwarzenberg had left after living more than 200 years in Český Krumlov. It is an amasing legacy and I would like to make you familiar with as well! Go the private “Schwarzenberg tour” with me by ordering online. Add to the notice just name of this famous family.I look forward meeting you in Český Krumlov!