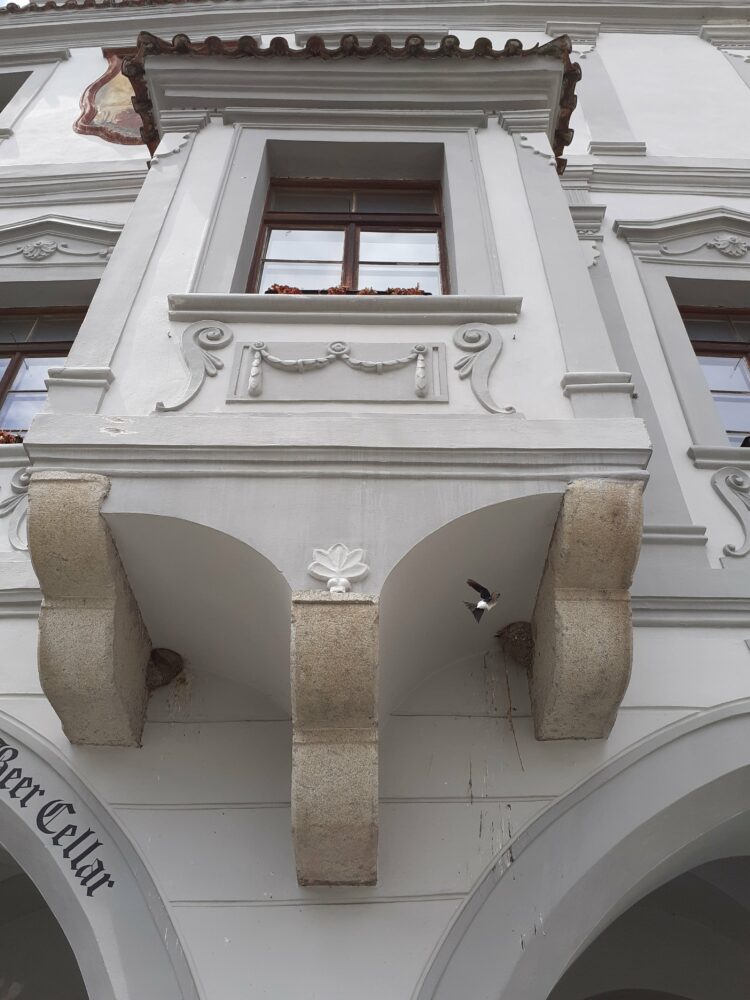 THE OUTSTANDING CZECH WRITER KAREL ČAPEK visited Český Krumlov in the time of the “first” Czechoslovakia ( 1918 Versailles negotiations-1938, Munich agreement). Never heard his name? Maybe. But I am sure, you have repeatedly used a word he ones invented- “ROBOT”. In Český Krumlov he could see no robots. He looked for other things here.

“THE MOST TOWERY TOWER”. This expression makes his skizza of our town legendary. Closely watching everything with open mind he noticed a unique masterpiece- the castle tower. As a penman he felt its archetypal qualities and expressed it easy in three words. Sure, he didn´t know the TOP SECRETS of the tower, BREAKING NEWS! We have investigated on it! I like sharing it with you during a city tour!

“THE BEST OF ALL is the little princely Baroque theater…An eighteenth century Italian opera could haunt this place at this moment.” Because of safty reasons and measures there were no performances available there. He knew it is a pity. But this has changed after the Velvet Revolution 1989! A few experimental performances per year are available and feel like a living trip to the 18th century Baroque theater culture. Italian opera haunts in this enchanting space again! Sometimes even as first night opening! Sightseeing offers to you another chance of visiting this most “magical” interior in the Cultural World Herritage Site Český Krumlov: original stage, authentic machinery, old benches, historically preserved theater fundus… It is worth of time and money!

REALIST. In the downtown Čapek counted the pubs. Among other things up in the castle he admired “lots of Baroque things” and “the summer-house Bellarie with such funny stairs on its chest”. Finally he came to conclusion, that ” for three crowns it was enough to see”. You see, so cheap is the town not any more. But still worth of visiting it!

“AUDI, VIDE, ET TACE SI VIS VIVERE IN PACE”/ ” Listen to, watch closely and keep silente, if you like to live in peace.” This inscription you could read on the fronts of several buildings in the past. For example on the so called “town hall of Latran quarter” .Latran quarter never ever had a town hall! Never mind, this is another story, that I would like to share with you meeting you here. The town is packed with marvels as well as history-a mix of factual chronicle and fabulous invention. Fake news are nothing new! Welcome to the Town´s History in the Stories of Magic Krumlov!

THE SKILLED WRITER ČAPEK listened to and watched closely. But he didn´t keep silent. Foreseeing rise of dictatorships in Middle Europe in the 1930s he urgently called for humanity, democracy and freedom! Beeing politically chased by faschists after “Munich agreement” he died. Our town he didn´t visit any more. So he couldn´t see “the most towery tower” covered with the hakenkreuz and finally in the second half of the 20th century with Soviet red star.

THE MESSAGE OF THE STORY: ” The grey widow of the Rosenbergs”. This metaphoric expression had been given to Krumlov by a German writer in the 19th century. Čapek could see it in similar way. As an ancient world with human touch, harmonious old things and the atmosphere of melancholy. Good literature overcomes the ethnical and national borders! His sketch about Český Krumlov is a good example of this fact.

THE 5TH OF “21 STORIES OF MAGIC KRUMLOV” calls ” The Krumlov Summary”. Such a walking tour inspired with the Čapek´s travel sketch I have made for local inhabitants on the 21rst of June 2020. And now, the most towery tower waits for you! My stories as well! Take it easy. Order online a private tour and write as notice “The Krumlov summary tour”. Visit the town and then Let´s go! The show-ing you round The Magical Town must go on! I look forward meeting you in Český Krumlov!