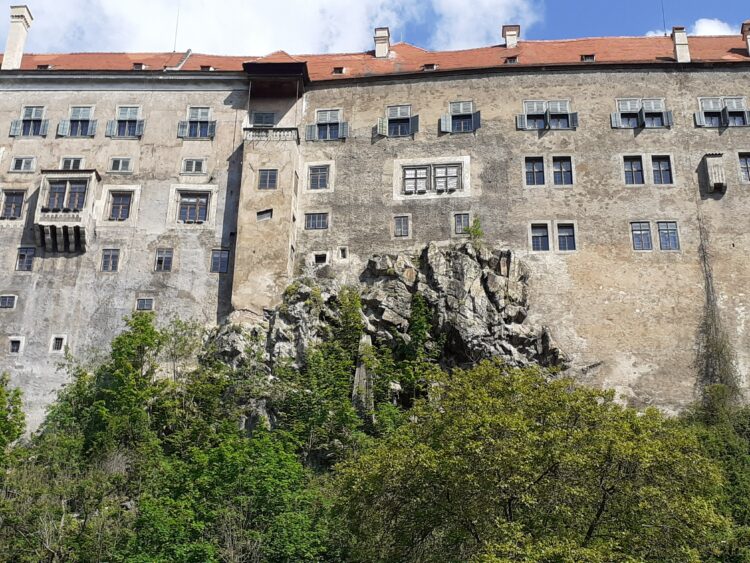 ROLLING STONES. Streets, roads or waterways. Coming to Český Krumlov, you will always pass by some rocks. Romantic and sometimes (more in the past) dangerous. Rocks set free some stones repeatedly. Falling not so slowly onto the roads or into the river, this could be a pretty challenging story! That’s why you see on many spots technically fixed parts of the rocks (technologies using iron, various nets etc.). History knows, it was not always easy to access Český Krumlov!

THE BERGs: The local-global aristocratic families usually had in their names the word “Berg” – Mountain. If “of the Roses” or the ” Black” one, the message was always clear: It reflected their origins. From the beginning, they liked to build their houses called castles on the rocks ( ragged cliffs, die-hard bills, precipitous promontories) and they have called their rocks usually mountains. They have word actualised inspiration taken from a famous book “… will be like a wise man who built his house on rock. The rain came down. The water came up. The wind blew and hit the house. The house did not fall because it was built on rock”.

3/6/12 The “power and glory” of the lords of Rosenberg flourished in twelve generations more than three hundred years in our region known as Southern Bohemia. Six men in the history of this famous family were called Petr / Peter (You see, their names have petrous etymological origin). At least three among them have left a very strong imprint in the character of their residential town and castle, Český Krumlov: Petr I, Petr IV and Petr Wok. During various tours I like to share the stories about them with my clients. So I would like to offer it to you as well!

LAPIS PHILOSOPHORUM/ THE STONE OF THE WISEMEN One of the basic goals of the alchemy. In Český Krumlov, the gold-makers looked for “the stone of the wise men” too. Probably no success. Nevertheless, their curiosity, perseverance, desire to discover things- isn’t it an inspiration for a good sightseeing tour? I would say “Yes”! The city tours in The Magical Town Český Krumlov like discovering things, looking for the stories, putting the information in the proper and relevant context…

STONEMASONS. We have not to forget them. They had taken stones into their hands, worked it up and put onto the proper spots. Handmade things feel distinctively different than industrially prefabricated things. We have experienced it with some locals during a topical tour called ” Rocks, stones and the stonemasons” (7.6.2020- the third of ” 21 Stories of Magic Krumlov). I told the stories about guild of local stonemasons or about so-called “Rosenbergs´ construction works “. But the focal topic were the factual stonemasons. Only a few we know by their names or identify by their signs, marks, labels… As for example the stonemasons´ family Rubik or another skilled stonemason-master builder Getzinger. In these cases we even know where they were from- Upper Austria, the town Haslach, the estates of Lords of Rosenberg about two hundred years. However, in the most other cases their names are unknown for history and public. But we can imagine at least the chain of their hands. Altogether they had shaped stone after stone, day after day centuries long this town. So they have worked on the ” Magic” of Český Krumlov. In particular on its “human touch”. Rocky music a sort of Bruce Springsteen. The boasters, chisels or cutters served as their guitars and the stones (shist, granite, kneiss) were their strings. A special sound scape in the townscape- a part of the in-scape (Genius loci) and of the memory of the stones till nowadays! WELCOME IN THE STUNNING STONY TOWN! A CITY TOUR WITH THE ” STORIES OF MAGIC KRUMLOV” CAN START FOR YOU RIGHT NOW AND HERE! With your first step: on-line booking.